[TEDx Talk] The 5 Key Ingredients of a Thriving Remote Team

Reading Time: 7 minutes
Graeme’s TEDxStudio talk is now available: The five key ingredients of a thriving remote team.
The hybrid/remote workplace is going to be reality for a long time to come, and we need to make sure we are ready for it. Our team at TomorrowToday has been working like this for 20 years, and we’ve been focusing our research efforts on understanding how to do it brilliantly for almost as long. Now, we are ready to share a powerful framework with the world, and bring to the market what we saw with the 85 clients we worked with in 2020.
The companies, leaders and teams who build healthy hybrid and remote teams will gain significant benefits and advantages over those that don’t. This is a priority for 2021 and beyond. And these five ingredients are the key.

Work from anywhere revolution has begun, but it isn’t about where or when you work, it’s about so much more.

About a decade ago, I learned that from my 11 year old daughter, Amy. She was on school holidays and she was bored like any good pre-teen. She tried to make that my problem, not hers. I worked from home all my life.

So there’s always work to do and admin that can be done even by an 11 year old in the business.

So I asked Amy if she’d like to help me with my job. She was so excited.

I settled her down in front of the computer, made sure she could do the work and left the room, or at least I tried to. As I got to the door, I heard a little voice saying, Oh, Dad, we haven’t discussed payment yet. I thought I’d got away with that. She might have done it for love, but she was right. We needed to negotiate. It was a decade ago and we were living in London.

So I said, Amy, how about two pounds per hour?

How does that sound to you? Amy thought about it for a moment and said, OK, Dad, that sounds fair, but would you mind if I worked really slowly?

How is it that an 11 year old a decade ago has worked out something that most companies have failed to understand?

Even now, we shouldn’t be measuring people by the hours that they work or where they work. We should be measuring their outputs. That’s always been true, but covid proved that beyond doubt. During with a lot of managers were asking, how do I measure my team’s productivity? I think what they really meant by that was how can I measure my team’s hours? How can I make sure they are working the hours they supposed to be working? How can I make sure they’re not being lazy and being sucked in by the three dangers of working from home the bed, the TV and the fridge.

Well, this is what the revolution is about, it’s about shifting that mindset from not measuring where people sit when they work or how many hours they work for, but rather by measuring their contribution. Amy was right. I needed to change back then. We need to change now. Some people might think that that’s just millennials, GenZE, whatever you’d like to call them, that they’re so entitled. You know, if they get into the real world of work, they’ll discover what the world is really like and then they won’t think that way anymore.

Hmm. Maybe other people might think this output based mindset is something that was just due to cover because we were working from home during covid.

And some people might just choose to ignore the myriad technology advances that are rushing, hurtling our way that allow us to be more flexible and mobile than we’ve ever been before.

Yeah, that’s why I’m using the word revolution. It isn’t just a simple shift in how we measure time sheets or how we manage people. It’s a fundamental management mind shift. If we don’t do this, we have the potential of ending up in the worst of all possible worlds, stuck at home, pretending to be at the office and not getting the benefits of being in either place. In fact, the only benefit I can think of that kind of world is that you wouldn’t have rush hour traffic in rush hour.

Traffic really must be one of the dumbest things we’ve ever done as human beings since the invention of the light bulb. Why we thought we had to all rush to the office as soon as the sun came up and then all rush home again just before it went down. All of us at the same time. Rush hour is truly stupid.

But then so is measuring your employees contribution by the hours that they work, what’s even worse is that over the next decade we are going to see an explosion of globalization as Amy and her friends start to look for their first jobs. They are not going to be restricted by geography. They know for sure that they don’t have to live in the same city as they job.

So what do we do? How do we respond then to this work from anywhere revolution? Well, sadly, there isn’t a silver bullet. There isn’t a magic formula. But the companies that I work for and work with who are getting this right, I think that they do five things.

They use all sorts of different models, models of motivation and team dynamics. They use even psychological frameworks like the circle of courage that was designed for at risk youth to bring them into a sense of community. So there’s a lot of different things that they do.

But I think that there are five things that they all do in common, five pillars on which to build your work from anywhere workforce.

The first of those pillars is belonging. This is a fairly obvious place to start.

We’ve got to create a sense of identity, of team, of tribe, if you like, in the physical workspace that just often comes by being in the same space as other people on a daily basis in a more remote environment.

You’ve got to be more deliberate about building that belonging. And you can’t just do what you did in the physical space online. You can’t just have a Monday morning zoo meeting and think you’ve created belonging. We’ve got to build rituals and and rhythms that really create a sense of belonging even in a geographically distant world. But a sense of belonging is a good place to start. The second pillar is mastery. Mastery is about our competence and our confidence to contribute to what the team needs to do and about our ability to know that we are getting better and better all the time.

This is about us and what we give to the team and what we contribute. And again, in a remote and virtual environment, leaders might have to think about people, people who maybe are very masterful in the way they were doing things, but now maybe don’t have the technology skills. Maybe they don’t even have the technologies itself to be able to contribute properly, virtually that your task as a leader to build that sense of mastery.

It’s not every person for themself because the fourth pillar is about generosity and that’s about helping others being there for others, showing empathy and care for each other and for the team, and extending beyond just your team and looking at society and the community as a whole and having a sense of are we generous and impacting society around us?

So a sense of generosity is the first pillar, and that leads to the purpose, a sense of purpose.

Now, by purpose, I don’t mean vision, mission, values, purpose, the you know, that stuff that’s on the poster in the CEO’s office. What’s on those posters? Again, it’s trust, respect, integrity. And what’s our customer service and what companies? The same.

It’s not those things. By purpose, I really mean a sense of making a difference in the world, the sense of contributing to society. Now, of course, not every job changes the world, but maybe in this remote working environment, you can at least give each individual in your team a sense that their world has a sense of purpose to it. You want to be able to give that autonomy and mastery and be generous in the way that you engage people such that they know that if they can manage their work around their lives rather than the other way around, which is managing our lives around our work, whatever these five things mean for you and your team in your context, you’re going to have to work that out for yourself.

It’s different. In different places, there’s a little bit easier for me, I suppose, 10 years ago with Amy because, well, she’s a member of my family and back then she was a child.

If we fail to do this, we will discover that the work from anywhere revolution really, really does hurt us.

In fact, if you don’t take the steps that are necessary to build these into your business, you might discover that the work from anywhere revolution is about when people work from because your people might choose to go and work somewhere else.

Find out more about our latest keynote on this topic 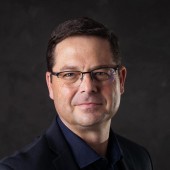 Speaker, author and expert on the future of work, researching disruptive change and helping leaders and their teams understand and respond to tomorrow's world today. Graeme helps people make the future place of work a remarkable place for all of us.

The Fierce Urgency to Strategically Reimagine